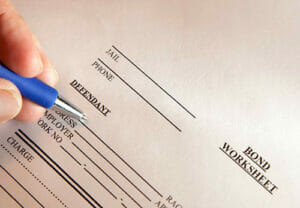 When a friend or family member has just been booked for a crime, it’s easy to start making decisions quickly. After all, you want them to be home and safe as soon as possible. However, in order to bail someone out, you often need to act as a co-signer. This comes with some important responsibilities that you need to consider.

What Is a Co-Signer?

A co-signer to a bail bond is very much like a co-signer to a loan. You are personally guaranteeing that you will become responsible for the individual’s bond debt in the event that they don’t show up to trial.

When a bail bond is initiated, the bondsman puts up a bond in the amount of the individual’s bail. Someone with a $50,000 bail can often get a $50,000 bond from a bondsman at around 10 percent, or in this case, $5,000. The bail bond company supplies the rest of the bail amount, so the percentage of the bail that you have paid is non-refundable, as it also goes toward paying bail.

If the person you are bailing out goes to court as expected, this percentage of the bail is all that will need to be paid.

However, if the person being bailed does not go to court, the full $50,000 amount becomes due. Often, a warrant will be issued for the individual’s arrest. The warrant will be that individual’s sole responsibility, whereas the bond amount will still be required from the co-signers.

Is a Co-Signer Always Necessary?

If the individual in question can bail himself or herself out, then they won’t need a co-signer. This process usually uses an asset, such as a home or a car, as collateral. However, if the individual in jail is not able to bail themselves out, and does not have assets available, a co-signer will usually be needed to guarantee the bond.

A co-signer may also be necessary to bond someone out quickly, as someone who is incarcerated may otherwise find it difficult to navigate the process while in jail.

What Happens If Someone Skips Bail?

If you’ve co-signed for someone who did not show up to court when scheduled, the individual has skipped bail. The bondsman is going to attempt to collect the bail, which has been forfeited.

While both you and the individual who skipped bail will be responsible, it’s more likely that you will be contacted — as the bondsman will know where you are. Both you and the person released from jail are liable, which means that you are both responsible if the full amount of the bond is not paid.

If someone knows that they cannot attend court, there are other options. There are times, for instance, when an individual can actually miss court because they are facing other charges in another county.

As long as the courts are contacted, there may be a way to adjust the court date so that the individual isn’t skipping bond and will not have a warrant out for their arrest. A bondsman can help with this as well, by helping you navigate the court system.

Are You Legally Responsible?

Another question you may have is whether you will face jail time if the individual doesn’t show up to court. Though you do become responsible for the bond, you have not committed a criminal act, and you are not at risk of jail time yourself. However, hiding the accused individual from law enforcement is a separate issue entirely.

Though time is of the essence, you may want to learn more about the bail bonding process before you decide on an option. AA Best Bail Bonds can walk you through the steps you need to take and your responsibilities. Contact AA Best Bail Bonds right now to get started.